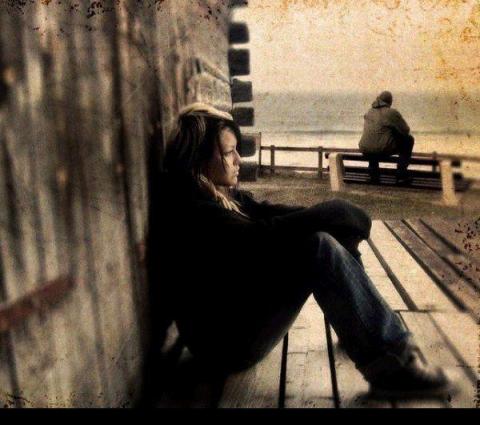 You sat alone every first day of school and hoped, no, prayed that no one sat next to you.

And when they did, you ignored them; it wasn’t long before they said hello, but you had already put your earphones in.

In class, you thought yourself above some and better than others, but far smarter than the girl that thought forever actually meant forever.

During clubs, you put your earphones in, turned the music up, and sat at the back of the classroom, hoping no one would notice you.

At lunch, when others sat beside you, you got up and moved three tables away, and if someone else sat down, you ate quickly, dumped your plate, and took off.

And when that “happy” couple sat next to you, you tried not to gag, but the girl continuously used the word “baby,” so you made eye contact with her, rolled your eyes, and left.

When you made friends, you called them associates, because “friend” wasn’t a title that others who don’t understand you deserve.

You told them you hated people, and pushed them away, because it was easier not to let them in.

And when they craved your attention, you give them that, because that meant it was okay for them to use it against you.

You sat alone, and when they asked you what was wrong, you said nothing, so they would leave you alone.

When they asked you out, you said no because your mom wouldn’t let you, or you had things to do.

At home, you sat alone in your room locked away in your own head.

And at night, you told God that sometimes, you felt that not even He understood you, so when He sent you an angel worthy of every title, who understood you, you pretended he didn’t and shunned him.

After fourteen years, you got tired of holding it in, so you told your angel, and he tried to understand, when he did, you longed to tell others, but bit your lip.

And when they asked you what you wanted to be when you grew up, you opened your mouth and said, “Alone.”

This is really kind of sad. But in a way I relate.

Thanks, it's about my struggle with social anxiety.