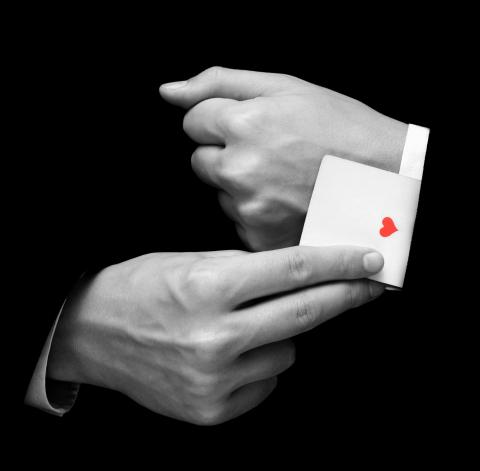 By Joshua Patterson, A.K.A. The Kronikler

The greatest trick that the Devil ever pulled

Was deceiving the entire world into believing he didn’t exist.

Into believing that untamable malice can be explained

By a configuration of genes that trace and project disdain.

Into believing that an inclination of gifting gives you elevated priority

Over the standards of your neighbors, and even figures of authority.

Into believing that your recurring lust after possessions

Does not stem from the seductive influence of obsession.

Are not soon returning full circle, by increments of six degrees.

That extracting vengeance upon those individuals who once oversaw your bounds

Do not nearly echo the true feelings of one in another’s sight.

That the power of a melody and the message it contains

Cannot recalibrate a sober mind into a deviant’s domain.

When a pedestal is the only place where we credit the Highest of names.

It’s easy to believe that the angst of public enemies

From which sadists, dictators and extorting entities

The abuse and abrasion of the politically impotent

The tears and the cries of those scarred and downtrodden

Their sanity bent and identity sodden

By zealots commissioned to bring desolation

To infidels unfit for assimilation

Into the abhorrent embrace of a nation

For freedom from traumatic threats of infliction

Of harm upon lives whose trespasses are fiction?

Are you calling society’s anguish justified?

The actions of the perpetrator dignified?

What also is to be said of those peoples so engrossed

In ideologies and opinions predisposed

That they’re driven to mockery without holds

Against constituents of opinions they oppose?

They advocate for the rise of their cause in the names

Of virtuous traits so embellished with fame,

It doesn’t take much to get lost in a noise

That has you so fixed on your power of choice

That you can afford no respect or attention

To perspectives founded on honest dissention.

So, we square-off our valued beliefs

From circles where they are not as well received

And exchange the unity of joint discussion

For the division of dictatorial percussions

That bend many to the rhythm of an -ism

And segregate most with an accusing schism.

In our efforts to move forward, do we take a few steps back

For understanding the timeless laws that determine justice and equality

That endow us with responsibility for maintaining a sense of civility?

When we look down upon contesting parties with condescending eyes

Are we presenting ourselves in some form of more positive light?

Through the pretentious conduct inspired by our resolutions, are we becoming

Than the supposed perpetrators of resentment we have vowed to defeat

In panels of discussion concentrated with increasing heat?

And finally, let us not dare to forget

Those private, unmentioned offenses that set

Our ethical qualities out of alignment

With virtues that stand as our human assignment

Our tendency to treat our neighbors with heat

In pale efforts to scald their feet from the peaks

Of triumph that few people manage to meet

And those few who get there find that their receipt

For life-changing feats indicates that their “peeps”

Aren’t quite as abundant or sweet as they’d think!

Not to mention those who thrive on contention,

Who feel that words are void of purpose or mission

Unless they’re being used to give one position

Above those whom they engage in verbal collisions.

Alright, so you made your point clear,

But disastrous results emerge from one mouth when it is not preceded by two ears.

Loose verbiage is lethal, but provides no defense

Against a firm argument backed by solid sense,

So before you decide to submit your two cents

Make sure it’s worth more than just mere condiments

That season your shame with a hum-ble-ing flavor

When somebody leaves you with real thoughts to savor!

And then we have people who like to burn bridges

By making it their lifetime goal

To spark division with insurmountable ridges

And digging of the deepest of holes.

If it’s not what they do, it’s what goes undone:

Withholding the honor expected of a son

From a father who, in spite of all odds, won

A future for his family in the face of situations

That greatly threatened their economic preservation.

A father who could not have known of the grudge

Confined in the cold heart of his firstborn, who drudged

In discussing matters that would have seen an early conclusion

Of his old man, who sometimes was better at winning the bread than showing

His love for a family he saw every other week,

His care for children who seemed to age quicker than he could think,

Than he could process his divorce from his wife,

His backstabbing by the blade of a corporate knife,

About serving as the head than the man responsible for leaving

Within his successor much greater things than wounds that are bleeding

Into the fragile, growing bonds that stemmed from a love that began

When two passionate applicants took on its heavy demands

With hopes for positive ends.

Ironically subjects his relationship with his family to greater strain,

Into his own offspring, who demonstrate a lack of respect

Influenced by his resentful perspectives, which were senselessly dictated

In order to ensure that this revolting hatred is duplicated.

Time can shape such indignation into a feud of generations,

Of a debate held in an era that eludes memorization

Are actually the property of predecessors who drew their beef from previous stews.

That result when we fail to embrace cold facts with a warm welcome.

To do otherwise is not merely to be complacent as the clock ticks;

To do otherwise is to fall for the greatest trick.

This poem is about:
Our world
Poetry Terms Demonstrated:
Stanza

10 reads for this poem