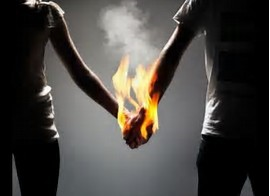 Why is it that I'm being punished for being honest? I'm not comprehending.

This companionship that we believed to be transcendant, seems to be slowly descending.

Down to a dark place just like that place I go mentally when I'm hiding from you.

Frankly I miss how our love used to be. This young infatuation that when you looked at me with those beautiful hazel brown eyes

All I could feel was the level of the perspiration that became like a trigger anytime you got close to me.

I thought that's what I made you do. Especially when I'd send a grin ever so slightly.

Really I just wanted you to hold me ever so tightly.

Sadly we all know the honeymoon phase has to end at some point. And so it did.

When it ended, it ended ferociously. With intensity we'd say "I hate you!"

Knowing very well that we only wanted to hear the word "I love you so much."

Our way of  communication was like a game of double dutch. We'd keep cursing eachother till we'd fall.

Then we'd start curing one another, until it was time to begin our personal cycle all over again.

Though he probably never felt it, when we decided the game was officially over, I was in love with him.

I only wanted to be able to speak to him. Caress his heart, and entice his mind. That was my goal.

Our game to an end for one reason. Nobody wanted to admit when they were the cause for any drawbacks. We didn't get a referee to settle disputes.

We only had eachother, and our game. So yeah. it kind of sucked that we claimed game over.

Poetry Slam:
#BecauseILoveYou Scholarship Slam — CLOSED
This poem is about:
Me
Guide that inspired this poem:
5 Tips for Writing a Free Verse Poem

38 reads for this poem