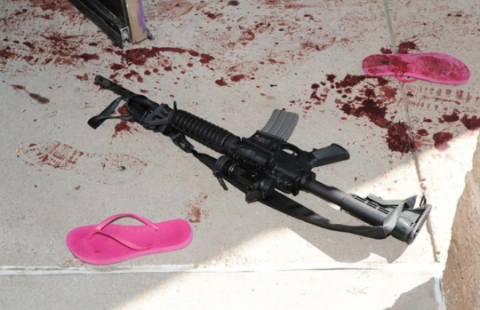 It was supposed to be a day of love and affection, but instead was tainted by the screams of children and the sound of gun shots.

Now, I am not naive enough to believe that the gun is to blame for that, but I do know that it could’ve been prevented.

Laws are in place to stop things like this from happening, yet it happened.

And this was not the first time.

Sandy Hook. Las Vegas. Orlando. Each of these places were forced to grieve an event that had absolutely no reason to occur.

If history is any indication, this won’t be the last time for tragedy.

Our national anthem itself says “for the land of the free, and the home of the brave”.

We have been brave, but we're certainly not free.

We are held back by the chains of evil criminals.

We are held back by the handcuffs of devastation and hate.

We don't want to be anymore. So this is our call for action.

I, and all American students don’t want to be afraid when we leave on the bus that we may never wave goodbye to our parents again.

Every single student that morning that left on their bus, or in their car, with a plan for their future. The future that they were unaware that they’d never get to experience.

We don’t want our lives to hang in the balance of one man with one gun. This is our call.

This poem is about:
My country
Our world