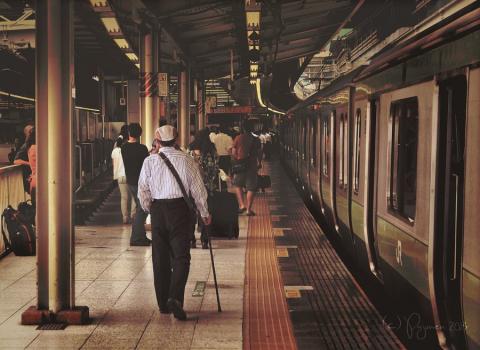 They lined the station like tchotchkes placed in careful disarray,

Here between F and 13th,

Bare porcelain angels waiting on the shelf of a Goodwill.

the wheels of an eight-car train.

He stifled a cough amidst the rhythmic clacking of the subway,

As if clearing your lungs meant giving away your secrets,

Letting them spray out towards the charcoal black tunnels in hushed tones.

I never miss a thing.

Another set of trains arrive.

Another set of doors open.

Their eyes smile back at me,

One by one they shuffle into damp train cars,

Melting into seats of plastic and leather

like little snowflakes on the back of your hand.

Doors close, another train pulls away,

And I stand on this platform,

Here between F and 13th,

Where I felt my ear was pressed to a beating heart,

Listening for the familiar thrum of my city’s soul,

And oh how it throbs!

How it pulses under my thumb like a cut with

Such vitality, such vigor!

My heart swells with the murmur of tourists and natives alike,

I watched at them with curious eyes and they watched me,

She smiled, breathing in the dusty train platform,

and It’s musk of a million people,

She watched and she smiled,

Standing on this train platform,