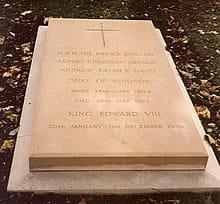 THE EPITAPH OF AN ABDICATOR

Once lived a demagogue of empirical hedonism.
His granary was fuelled with the philosophy of epicureanism,
was gregarious and gullible, obstinate to be the centre of narcissism.
Neurotic, he was the cynosure of Machiavellianism.

The Proclaimed young heir, was far from the magic of iconoclast of sarcasm;
The eldest child of Duke and Dutchess of York,was entitled Prince of Wales.

The Heir had a historical encounter with Wallis Warfield Simpson by fatalism.
By proposing Wallis, the royal blood, Edward VIII, became an icon of iconoclasm.

The resultant mayhem broke, became the bottleneck of idealism;
sagacious, he was brooding strategies to be the prototype of true heroism.
The proclaimed marriage faced vehement opposition:
all forms of religious, political and moral objections.
The outright denial to accept Wallis as the king's consort, broke the rebellion.
Edward's refusal to give her up led to his final abdication,
when was quite apparent, he could not marry his beloved Simpson,
decided to rebuke the throne from enticing royalism as emancipation.

The royal blood, then entitled the Duke of Windsor, a transformation after abdication.
Edward VIII, once epitome of monarchism, became an ideal icon of non-egoism,
A hedonist, became a stoic by deserting, seductive royalism
to prove his infallible love, indeed the tale of unprecedented impeccable loyalism!
The abdicator's epitaph on Royal Burial Ground, Frogmore,
Still bears the testimony of the tale of an unconventional love
of epoch making transformation Of lucrative royalism to transcendental loyalism
By relinquishing the throne to claim iconoclasm

It's wonderful to have evaluations! Thanks!

98 reads for this poem