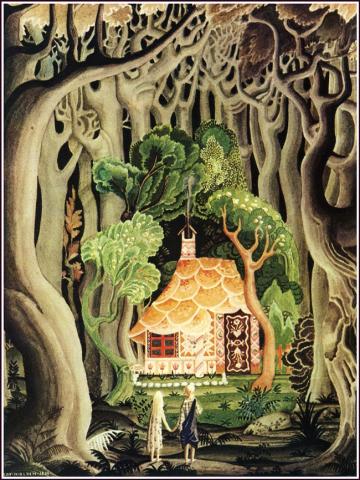 There once a gem of great beauty;
who's heart was pure as gold.
As a fair maiden she had her duty
to find a man to love so bold.
So she found a man with strength unmatched
with a heart as deep as night.
He proposed to her with rings of copper and of brass
and they wed under the pale moonlight.
He gave her a home encompassed in vines and flowers
and a box of treasure to ensure their lives till parting.
When he made love to her, he promised "a perfect life for us and ours"
with the breaking of the dawn the signaling of their life now starting.
Happy these lovers were for small a time
Until worry and madness began to seep into their minds

Soon enough the maiden felt resltess in her slumbers
and fell sick within the morning light.
Her lover went out, continually hacking at lumber
so her could a provide a fire to help her, a warming sight.
What is the naeless, villanous condition?
What could take his love away, he wondered to himself.
Till she said "There will be a new addition,"
"It is the cause of decline in my health."
He rejoiced at the idea of a child who shared his blood
but his love only looked away as if ashamed.
He then realized the babe was as wanted as worms in mud
and she did not want this child to claim.
It was then that their love, which had been firmly cemented
would so soon become broken, shattered, and fragmented.

And so nine months came to pass
when two pairs of eyes looked upon the world
whilst screeching and wailing like the breaking of glass.
These new fates began to unfurl.
The maiden lay sick as the twins grew older.
Her lover hacked at the land laiden with trees
even as the days grew unbearable colder
just to provide ends meet.
The lovers grew distant
as their twins grew inseparable.
Their father tried to love them with insistence
which caused their mother's pain to shy under unbearable.
The maiden sadly kept getting sicker
and her lovers hope in her began to flicker.

The children however were two of a kind.
Their love as strong as a dragons scales
but they were a nuisance in their mother's eye
for they had caused her permanent ail.
Her lover no longer wanted her
because of the children she had to bear.
Her life would be snuffed out in a blur
a fear her lover could not share.
Each day that past her heart grew evil
Each dawn the broke her children grew more sad
In her mind she became more deceitful
Her lover, pained and lost, was not so mad.
She became a heartless, cold and frail woman
However her faults were, at best, completely human.

Her lonesome lover worked hard, day and night
She'd scream and rage till her throat ran dry,
every time he came home from the working light
Not one word did she utter to apologize.
Brother and I did our best to stay away from Mommy,
as Papa had instructed at an early age.
We'd hide when he was away, eating only the seeds of Poppy.
However when she found us, she'd go into a fit of rage.
"If only we were never born", she'd often say.
She'd murmur like a madman on drink,
That she'd "take back that wretched day."
If only she knew then this pain, she would've had time to think.
The first moment we cried, we dommed her to her fate.
And now she will never enter those pearly gates.

But one day she was silent, words she said not.
Even when the sun went down into it's slumber,
she laid in bed, and wanted for naught
Not a peep until the moon woke for its bright number.
I laid in bed to the whispers of mommy and papa's angry voices
until the need for sleep dragged me away.
Papa stayed home the next morning, and yet the house was devoid of noise.
He quietly promised that he loved us, and wished we could stay.
Brother and I were confused but we followed Papa into the wood.
Hansel kept behind me, clutching my hand tight
Until after a long journey we didn't know where we stood.
There were no homes and no landmarks in sight.
Papa said that we were going to play a game
However his definition and ours were not the same.

Papa left us hiding behind a massive tree trunk.
We believed he'd come to find us, like he promised in the game.
Hansel hugged me as I cried, for my heart had sunk.
Papa wouldn't do this, our mother was to blame.
What were we to do, I became worried.
"Momma said she wanted us to disappear!" Hansel said.
To which i did believe, but to go back we'd face her fury.
Hansel had heard and grabbed some dough,
He said "We will find Papa again and all will be well!"
Hansel left us a trail to follow home.
I was afraid to go to that house, and these fears I couldn't quel.
But my brother kept his word and by morning we had found our way back,
back to the cold vengence our father does lack.

We snuck into one bed, our hands held tight;
we could not believe the dastardly plan made by our kin.
Once again we prayed to stay out of her sight.
But when we woke, there was naught but our mother's twisted grin.
"Not deep enough he took you, and you found your way home,"
She screeched and she fretted, running to heat the flames.
"So now I will skin you, pulling meat from bone."
We tried to flee and scream, but our mother tuned out our fearful exclaims.
She tied us up with a demonic glee,
and she went to the kitchen, rustling quickly around.
Papa wouldn't be home soon enough to set us free.
and from these ropes we could not be unbound.
Hansel looked at me, his eyes wide with fright.
I could not take his hands, as we were bound tight.

I felt myself cry as the knives were brought out.
Mother taunted us, telling us not to cry.
There was no reason for tears, no reason to shout
She said she'd reward us with decadent cakes we just had to try.
She laughed and laughed as she forced us to eat
the things denied to us as we hid from her rage.
We struggled and struggled till the ropes tore at our feet
until we lay still, much too weak for our age.
My eyes were closed as she sharpened her knives,
only to hear a startled cry.
Father had come home early and saved our lives
by pushing his love into fire, which had once represented their unbreakable tie.
Her wrinkled skin lit up like dried and aged paper.
Her oily hair smelt of bonfire vapor.

Hansel and I grew up with a father full of love.
We agreed to never speak of mother,
for she was his beloved.
But like her burning body, her memory was smothered.
All know our story, but everyone knows its lies.
The witch was our mother,
hidden in disguise.
I don't doubt she was good once, and could've loved me and brother.
But she knocked on death's door
and fell into hellfire all the same.
I guess that's our fault that she was rotten to the core.
Hansel says no, but I can take that blame.
But it doesn't change the fact that mother was the devil.
And so this is the true story of me and brother, of Hansel and Gretel.

22 reads for this poem