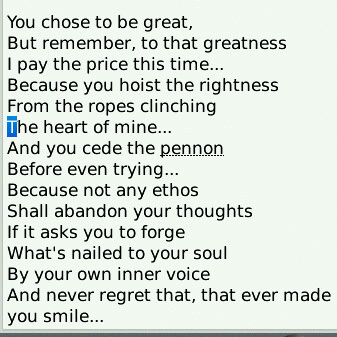 Change is what I can see

What I can hear

And what I feel everywhere.

By my well-dressed organs,

Dressed in customised compulsion of slumber confusing which with perfection

But not my soul

Not my naked rebellious absolved soul, which died to look out of the darkness of the cave

So it could be that,

My eyes, ears and mind are corrupted

And what’s true is my soul in jeopardy

And my spirit, that does not reside in consent

But my reasoning and logic

Is formed by dripping poisonous plague like umwelt leaked by fault

And thus creates the reality

Because my soul is immortal, immutable and grandiose to live in shadows and die as shadows

And there is a lot which won’t change with time

From always till always there will be,

Tides coming back to beach, to die in peace

A lover for a lover,

They would sought war for peace,

And birds flying till horizon,

Point being made is, there’s a reality we stick onto, on which our worlds are based on. To which we guard 24/7. But that reality is built up by our organs, senses. Think, a magician can very well truce with your visual senses, same goes for all the senses. So, the reality is just another virtual thing. You cannot rely on ears, eyes, and senses to know the ‘true’…like the best example is, love. The senses are mere steps in love to know the true magic. Just the same ways, what’s true and something which is above all or below all and all, cannot be reached by senses. Rather it can be reach by soul, spirit and some magic only.

Another point is, we always think things change. But we think on our own scale. Think of it from a little above. For example, all the horses in the world are born, go young, get old and die. But that’s something happening from always till always, so overall nothing is changing, but for one horse living it, everything is changing every moment.

Out of the darkness of the cave, is a small phrase written by Plato to explain Socrates life. You must understand this, but before that, you should know that Socrates was the ‘wisest man ever lived’ from old Athens. And he was wisest not for what all he knew, but what all he didn’t knew. Yes, he was wisest for the questions he asked, not for the answers. His questions could disturb the smartest minds. that is why he was ‘the wisest man’. (In those times, of course). Plato was the guy who wrote all about Socrates, Because Socrates never wrote himself.

Some words you can find on dictionary, umwelt means, the personal realities we have built, the perception each one creates…