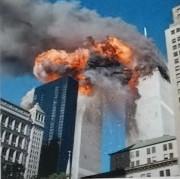 Cowardly terrorists caused many people a great deal of sorrow.
On September 11, 2001, 2,996 people would have no tomorrow.
Many people died because a few planes were hijacked.
Almost 3,000 people died and they won't be coming back.
At those innocent people's funerals, many people showed respect by sending flowers.
All because those terrorists caused those planes to crash into the World Trade Towers.
Twenty years ago today, many had good reason to be afraid.
Time sure does fly, it doesn't seem like it has been two decades.
Mom donated $100 to the families of the people who passed away.
She was truly sorry that those people perished on that terrible day.
That tragedy is something that people can't forget, it's something we will always remember.
Because of cowardly terrorists, many innocent people died on the eleventh of September.

(Dedicated to the people who perished on September 11, 2001)

This poem is about:
My country