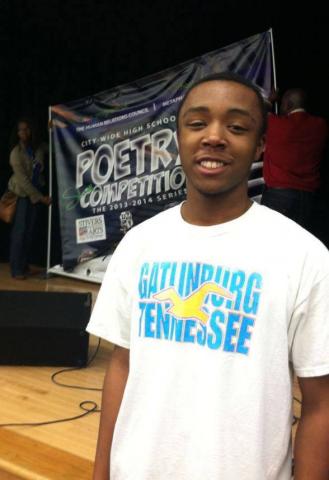 When someone gets them a gun

They automatically think that they’re bad

They think they're real cool and savvy

They think they have "Swagg"

But may I tell you my opinion?

That you need a gun

To make yourself seem big and bad

I'm going to tell you something else

The government thinks our community is the worse

Just because we're mostly black they call us dangerous, inferior, sorry , and sad

They call us every single one that's a synonym for bad

And yeah you're right

It kind of gets me mad

But it's hard to refute when our community is honestly bad

Every where I look it's another fight

Another mother crying to night.

So what can we do?

What can we do to end this violence tonight?

That affected me and my family

And what makes it's worse

Is that it happen in our community

The first incident happen 5 years ago

Looked him in the eyes

Tears went rolling down her face

But before he could even speak my mother said

"Baby, your dad is dead"

So I went over to my brother to ask what happened

You know what happened next?

My brother hugged me and said I love you.

But in that moment, I felt all his pain flow into me

And my tears started to flow in harmony

I felt the sorrow and loss of innocence he felt

And then I hugged my brother back and said, " I love you too"

But fast forwarding to the present where I stand today

I realize words are just words

They don't make the pain go away

I noticed this as I watched my brother grow and grow

He stopped paying attention in class

And talking back to his own mom

The same news that knock off my brother's halo

But I won't let my brother change

Because I could have been the same

I stand here and I speak my pain

But if he needs to be fathered through his problems, he can call me father figure

My brother said it's too late

I looked at my brother and said, "God created time, so what makes you think it's too late?"

I hope you get what I'm trying to say to you

But I can't change the community by myself

I need every single one of you

To free our spirits from these earth bound chains

To break the repeating cycle of poverty and pain

We can start a movement, that will bring a great change

Not with rusty old dirty chains

And when the future generation comes up to you

"What does it take to build a great community?'

The only thing you'll have to say to them is,

"You need two things, Heart and Will"

Every day was a good day

Until a couple weeks before my birthday

I walked on and some of the group stayed back, but still some followed

The group was still following me

The people around me started to depart

Not the thugs, but the students

That's exactly what I did

I took off at a mad dash

Faster than than flash

I had to be at least 25 yards in front of them, when the most peculiar thing happen

I tripped in a ditch

That’s when everything went wrong

because the thugs caught up to me

and when they did, I thought I was through

Beat me with a gun

And yes I was furious

And my family was hype

But you know what?

The devil had won that battle

But I had won that night

You see, I realize that's what the devil wants us to do

He wants us to kill and fight

And since no one has stepped up to him, he feels that it's his divine right

The devil wants us to be stupid, evil, and to die young

His heaven is our graveyard

But I won't let our community be overrun

But a vow so sweet,

that when the devil hears it it'll make run and weep

A vow so strong

We vow, that our community will be the start of a change in history

And you know what?

I might just have to get this vow stitched to me

I love your spoken word. I believe that there are so many people out there that need to hear this! It brung tears to my eyes. I'll be sharing this video! GoodLuck!

Thank you very much! It means a lot!

91 reads for this poem