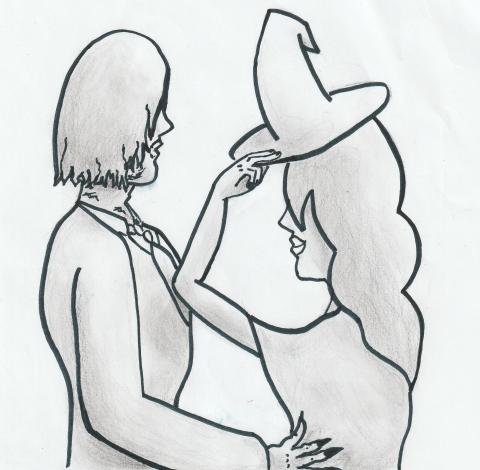 What if this story was about a beast,

And we didn’t need a beauty?

What if there was no happy ending,

And we ruined your perfect story?

Mordecai was the son of a rich family,

Until one day he ran into a witch

Who gave him one chance to improve.

However, he remained stubborn

And didn’t take the words to heart.

So the witch appeared once again

And tore his world apart.

Upon him, she laid a curse

And said the following words:

“You have a year to find someone to love you,

Mordecai was still a man

But battered, scarred, and burned.

He hid himself away from the world,

And the name Mordecai was no more.

He lived deep in the woods,

Thinking he’d never meet anyone else.

But more importantly any woman

Who could lift the pain he felt.

And never shows when it should,

But it came in the form of a woman,

A woman he met in the woods.

The woman was strange,

Scrawny, and wore all black.

But the beast did not judge,

As the months drew on,

He fell in love more each day.

His love was soon returned,

And the woman promised she’d stay.

She was supposed to break the curse,

But this is where the story twists.

Because the woman he fell in love with,

Turned out to be the witch.

She was beauty in disguise

But then showed her true self.

The beast had been fooled so easily

And couldn’t describe how he felt.

But love is unexpected,

And the witch had to confess

That she fell in love with the beast

Even though she tried to detest.

The witch explained herself

And asked for forgiveness first.

Then she said with great grief that

Witches can’t break their own curse.

The beast loved the witch

And didn’t care if he stayed the same.

They would stay in love, and

The curse was placed on someone

Who needed to be changed.

Little did they know

Things would change in so many other ways.